Soothing and relaxing cinnamon tea recipe that could be enjoyed hot or cold. It tastes just amazing and with so many variations that you can never get bored of this tea.

If you’ve got some cinnamon in hand and you love tea then this post is for you. I can share amazing ideas to enjoy cinnamon tea every day with delicious flavors.

I love tea, it’s the most soothing pleasure after walnut brownies. It’s an after-meal love affair for me that is the perfect way to calm my mind before I finally doze off.

I make ginger green tea, after heavy and spicy meals. Chocolate tea is best when you crave something sweet. Ginger turmeric tea is best in winter and to treat cold.

And I have another confession to make, I love to chew cinnamon and I like that cassia cinnamon for its stronger spicy taste. But a lot of it is not good.

Why you should try this tea?

There are two major types of cinnamon. The commonly available and cheaper cassia cinnamon and more delicate and expensive Ceylon cinnamon.

Briefly Ceylon cinnamon or true cinnamon is the thin inner bark of a cinnamon tree that curls upon drying. It has a mild aroma with a sweeter taste.

Cassia Cinnamon is thicker, rough outer bark of cinnamon tree with a stronger spicy taste and strong aroma. You can read about cinnamon varieties here at Cinnamon Vogue.

Which ones are better?

According to Healthline tea is made with both cinnamon varieties are healthy to consume. But cassia cinnamon is high in coumarin. So Cassia cinnamon should be consumed in moderation that is regular use in large amounts should be avoided.

You need just three basic ingredients for the cinnamon tea recipe. Other ingredients are variations.

The cinnamon tea recipe is straightforward and simple.

Variations of this tea are endless. While tea and spice variations are clearly mentioned. You can also add fruity flavors to this.

Apple cinnamon tea: For apple tea you can either add apple slices directly to the tea. I’ve tried adding apple peels as well (after making this apple jam). They add a nice tangy flavor, skip the lemon juice. If making cold cinnamon tea, you can mix apple juice and skip the sweeter.

Orange cinnamon tea: Similarly, you can add orange zest to the tea along with cinnamon. Make sure to remove the white bitter part of the peel and add the zest only. If serving cold cinnamon tea, orange juice could be added as well. The process is similar to my Orange Peel Tea.

How to store cinnamon tea?

You can store cinnamon tea in the fridge for two days. And enjoy it hot or cold. We’ve tried mixing it with lemon or apple-flavored soda as well.

Can I reuse cinnamon sticks?

The used sticks can be dried by keeping them on the counter. The sticks can be reused in tea or other cooking but the flavor will not be as intense as most of the oils are released in the tea. But they still have some aroma after brewing.

If you try this recipe, I'd LOVE to hear your feedback in the comments. Your 5-ratings motivate me to do my best. Stay connected for more recipes and videos on Facebook, Instagram, Pinterest, and Youtube. 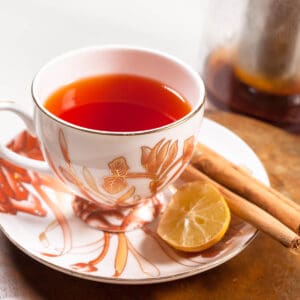 Storage: You can store cinnamon tea in the fridge for two days. And enjoy it hot or cold. Cinnamon: I used Ceylon cinnamon for this recipe and I used 1 large stick of 6 inch broken into 2. Depending on your type of cinnamon and how strong you want the tea to be. The amount of cinnamon used in tea can differ. Sweetener: Honey is most preferred choice. You can use any sweetener or can have it unsweetened as well. Optional add-in: Try to select any one spice and 1 tea. Tea: You can add either black tea or green tea. Spice: Ceylon cinnamon has lovely taste on it own. Use any 1 spice or herb or skip altogether.