I’m super excited to share this cream of spinach soup recipe. I got this recipe from a dear friend. And my family is almost in love with it, even my 9 years old picky eater loves it. My hubby calls it a perfect soup taste.

Texture of cream of spinach soup

What else? The spinach and cream gives this soup natural thickness so you do not have to add potato or flours to make it thick. The texture of this soup is of melted butter that is thin but not watery. Something that you can have in a cup while watching your favourite show. If you want thick soup then you’ll have to make béchamel or white sauce base and mix soup in it. But, I don’t recommend that since this soup taste great as it is.

I kept the cream a little as possible in recipe and substituted most of it with milk for low-calorie, healthy and creamy spinach soup.

Is spinach good in soup?

Spinach is a low-calories and high nutrient green. As spinach is slightly bitter and has strong taste. Raw spinach doesn’t taste as good as cooked spinach so you can’t consume a lot of it. Like, you can easily eat 100 grams (that makes ½ cup ) of cooked spinach in one sitting compared raw spinach (that makes 3½ cups).

One particular reason spinach is better in soup is when you cook raw spinach in soup all nutrients stay in the soup. While other main course recipes calls for discarding cooked spinach water which is complete waste of nutrients. (You can find more info about spinach here at live strong).

How to add  fresh spinach in soup?

Fresh spinach: If using fresh spinach for soup, make sure you wash it in a large pot and let the dust particles settle in bottom of the pot. Leave spinach soaked for a minute. Then pick spinach leaves from the top. Repeat the process once more if needed. Then remove thick stem from the leaves.

Then put spinach leaves along with water or chicken stock in a pot and cover with lid. Cook spinach until it gets soft and wilted. (about 7-10 minutes) Now, you can use this spinach in any soup as needed.

Can I use frozen spinach in soup?

How to make cream of spinach soup?

This soup is super easy to make! Have a look at the ingredients.

Chicken stock: You can use homemade or store brought chicken broth/stock. I used homemade chicken stock in which I added one whole chicken bones, 1 onion, 1 corn on the cob ( sliced ), salt and few pepper corns. Here’s my chicken stock recipe.

Spinach. Use 1 cup frozen spinach or 200 grams fresh spinach. Thaw spinach before blending. You can also heat spinach and chicken stock in a pot to thaw frozen spinach. 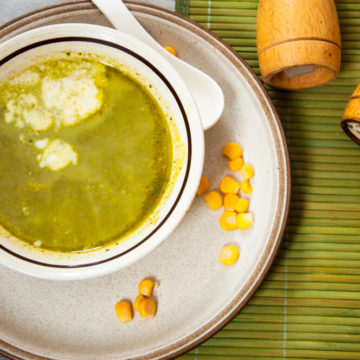 I got this recipe from a dear friend. And my family is almost in love with it, even my 9 years old picky eater loves it. My hubby calls it a perfect soup taste.
Click stars to rate this recipe!
0 from 0 votes
Print Pin
Prep Time: 10 minutes
Cook Time: 15 minutes
Total Time: 25 minutes
Servings : 5 cups
Calories: 99kcal
Author: Mariam Sodawater

You can heat frozen spinach with chicken stock to thaw it. Then blend with immersion blender and proceed with rest of recipe.
If using fresh spinach, first boil spinach with chicken stock for 5-7 minutes until soft and wilted. Then blend it into a puree. And follow the rest of the recipe.
I used homemade chicken stock in which I added one whole chicken bones (carcass), 1 onion, 1 sweet corn on the cob ( sliced ), salt and few pepper corns. I cooked it for 1 hour. Discard the solids and used the liquid in the recipe.
Tried this recipe?Mention @Recipe52 or tag #Loverecipe52!
cream of spinach soup