I had been making Kali Mirch Gosht recipe every year on Eid. But, it was always dry, chewy and not as delicious as I would want it. Then, once I had delicious Kali Mirch Gosht at my aunt’s place. We both had same recipe but the difference was the cut of meat we used.

I always used boneless meat from lamb leg. While, she used shoulder chops. The fact is boneless meat is tough with thick grains. While, meat close to bone is high in fat and has soft tissues.

Here a photo of raw shoulder chop, so you know which cut I’m referring.

This time, I tried kali mirch gosht with shoulder chop and trust me, it was melting in the mouth, so yummy, my hubby who is crazy about Kali Mirch boti just loved it.

My other similar recipes 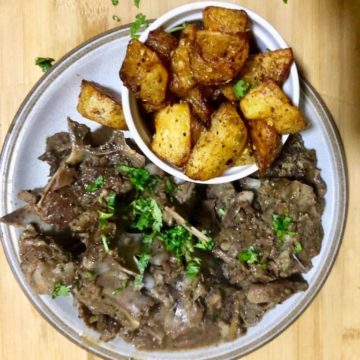 Shoulder chop works best for pepper lamb but if you use any other cut make sure it is meat on bone and is high in fat like ribs.
Tried this recipe?Mention @Recipe52 or tag #Loverecipe52!
Kali mirch gosht Recipe

Put all ingredients except garnish in a pot. Mix well and bring meat to boil. Now cover the pot tightly and cook for 30-40 minutes on medium low heat.

Meat is cook and almost coming off the bones. Cook of high for 2-3 minutes without drying all gravy.