Do you also feel keema curry has an amazingly satisfying feeling; it is convenient to cook, and it is also very forgiving when you use it in any recipe. The Keema Matar is the most common Indian mince curry with its origin in India, and Pakistan.

Keema means mince of any meat usually (beef, mutton, lamb, or chicken). It is also spelled as qeema, kheema by some. Matar means green pea. So when cook mince and peas in Indian style tomato and onion gravy, it is called keema matar. In winters, when fresh pea is plenty, it is a must-have in non-veg Indian homes.

What to serve with keema matar?

Keema matar tastes great with all Indian flatbreads but I assume garlic naan is the best option. Don’t keep the keema too dry. A light gravy as shown in the picture above is best as it allows the naan to get moist and doesn’t give a dry bite. Plain basmati or zeera rice compliment keema matar very well. Usually, in Indian homes, rice and naan both are be served with keema matar. If you are looking for another side to serve along keema matar, any lentil curry would pair well, like this moong/masoor dal.

How to make Keema Matar?

A delicious keema begins with golden fried onion. (However, you can also you store-bought fried onions. In that case, fry the spices first and then add the crushed and fried onions.)

Make sure your onions are thinly sliced. Fry onions on medium heat with frequent stirring for evenly fried onions.

See the onions are just golden and not too dark or burnt.

Once onions are golden add the spices. Reduce heat to lowest while adding spices. Let spices sizzle for few seconds then mix in tomatoes.

Mix well, cover the pot and cook on medium heat for 2-3 minutes until tomato water dries and you see some oil shining on sides of the pan.

Add the mince and yogurt. Mix well and cover the pot again. Cook for 5 minutes on medium heat.

Add the pea (matar) to the keema. Cover and let it cook another 7-10 minutes until peas are cooked. Adjust heat as needed.

It is always better to use pre-boiled peas as cold storage and non-seasonal pea can take very long to cook. I used frozen peas that quickly get tender. You can also add small cubes of potato in mince at this stage to make aloo matar keema.

My mince and peas are cooked, I’ll cook this mince further on high heat for 1 minute with constant stirring to dissolve some of the onions.

If you like a little gravy in your keema add about ½ – ¾ cup water, Bring curry to boil and then simmer for 5 minutes. If you like dry keema matar then simply plate out and garnish with ginger, coriander and chillies. 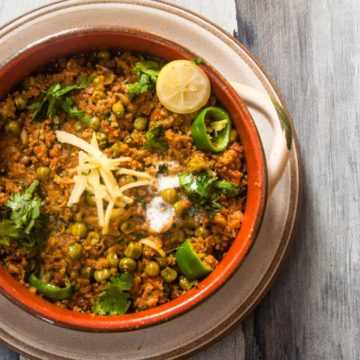 Welcome to my blog! I’m a passionate foodie who focusses on South Asian Foods along with fusion  food recipes, world food, baking and so on. You’ll find step  by step pictorial and videos here.  Feel free to ask queries in  comment. I love to help!

Get new recipes in your inbox!