This oven-baked crispy Keema naan bread is stuffed with spicy and tangy kabab-like ground meat. They are also called keema walay naan. And what's more, they melt in the mouth soft from the inside and crispy from the outside. This Keema naan recipe has many variations and I shared both oven and on tawa cooking methods.

I love keema and I love naan, and this keema Naan or keema walay naan seems a love child of both. When I started testing this recipe, I wanted it to be perfect and just like the one you get at dhabbas in Lahore.

Originally, keema naan is baked in a tandoor, a cylindrical clay oven. The stuffed naan dough is pasted to the hot wall of tandoor. The wall cooks the bottom of naan while the heat of the oven makes the naan golden from the top. To mimic that same process at home, we first cook the naan on tawa which makes the bottom of naan crispy like tandoori naan, and then we bake it in an oven which mimics the heat of tandoor giving a crispy top to naan. You can learn more about naan bread on wikipedia.

Ingredients: The ingredients for naan are the same as those of bread which is flour, egg, milk, yeast, salt, cumin, yogurt, and sugar. Yogurt helps attain typical naan flavor with background sour touches. Cumin adds flavor to the naan bread.

Ingredients for keema stuffing are

I know the step-by-step cards are showing many steps and you might feel overwhelmed but actually, it is very easy to make. You can marinate ground meat a night ahead and store it in the fridge. The dough can also be prepared 4-6 hours ahead. Remove the mince stuffing 30-45 minutes ahead of making from the fridge, so the stuffing is at room temperature and cooks quickly. The dough is also pliable and fun to work with.

The naan recipe is simple but the keema stuffing recipe has a lot of variations. The recipe, I’ve shared in the recipe card is the easiest and most authentic one. The two most common variations are using cooked mincemeat stuffing or uncooked stuffing.

Naan stuffed with Uncooked keema: The uncooked keema stuffing is more authentic and easier as you skip the cooking process. The only drawback is you can't taste test it like a cooked keema but, I have a fix for that too. Just cook a small bit of keema on the stove. It will look like kabab. And you can taste test it.

Unlike some fear, the uncooked stuffing cooks easily as you bake the naan in the oven. The keema tends to cling together and taste like a kabab stuffed in the naan.

Naan stuffed with Cooked keema: Most home cooks prefer the cooked keema version as they do can do a taste test before adding keema to naan. If you choose this method, you don't have to touch raw keema while you spread keema on naan. You can use leftover keema too. If cooking keema naan on the stovetop, cooked keema works best.

What is keema naan made of?

In simple words, it is an oven-baked flatbread with spicy kabab-like mincemeat stuffing, usually, lamb or goat mince is used. It is very popular in Pakistan, especially in Lahore.

What to serve with keema naan?

Keema naan pairs very well with any chutney like mint or tamarind chutney. Garlic raita or any sweet and spicy sauce are good choices. You also add sliced onions or salsa on the side.

Can I make it on the stove?

Yes, You can make keema naan on the stovetop too. For stovetop, keema naan makes cooked keema stuffing. Cook the bottom of naan on iron or stainless tawa with the handle. Then flip tawa and cooktop of naan by exposing naan to the direct flame of the stove.

Hungry for more? Try these! 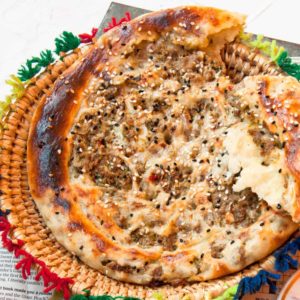 This oven-baked crispy Keema naan bread is stuffed with spicy and tangy kabab like ground meat. They melt in the mouth soft from inside and crispy from the top. This recipe has many variations. I shared the oven method in the steps. For tawa cooking method and cooked keema steps see notes.
5 from 1 vote
Print Pin
Prep: 2 hours
Cook: 30 minutes
Total Time: 2 hours 30 minutes
Servings : 5 servings (4 Naan)
Calories: 843kcal
Author: Mariam Sodawater
Prevent your screen from going dark

Instructions to make cooked keema stuffing: In a pan add minced meat and ½ cup water. Cook until water dries. Now add oil and fry the mince. Add all the spices except green chillies, ½ chopped onion and coriander. Let the mince cook until it’s brown and well done.  Now mix the onion, green chillies and coriander and mint leaves in hot keema and turn off the heat. Set aside to cool. The keema stuffing should be absolutely dry. (Use cooked keema stuffing if making naan on the stove top without an oven.) Instruction for cooking without the oven: After following steps "For Naan" for these steps. Apply little water to bottom surface of the naan to make it wet. Then transfer wet naan on a tawa or pan which has handles to hold. Then cook the naan for 6-8 minutes on medium heat. (The naan should stick to the tawa or pan because the bottom was wet. Don't use a non stick pan.) Now increase the flame and flip the tawa or pan to expose the upper surface of naan to direct heat. This will cook the top surface and make marks and crispiness similar to an oven. Adjust the distance of naan from flame as needed and cook evenly until it has golden marks. Store cooked naan: Store naan covered in a cloth. If storing longer, let the naan cool completely then store in an airtight box at room temperature for few hours or in the fridge for 2-3 days. You can freeze naan similarly. Defrost completely before reheating. To reheat: Sprinkle little water on the naan surface. Brush a very little oil all over and then reheat in the oven for 5 minutes on the wire rack. To reheat on a tawa, cover the tawa with any lid for 2 minutes then flip naan and reheat throughly.