Are you ready for the fool-proof recipe of Whole Wheat Pita Bread? Ok, I love making flatbread of all the type. And making whole wheat pita bread is an absolute pleasure. When you see the bread puff in the oven one after another, it is such a joyous experience, filled with a sense of satisfaction and a tiny achievement too.

Pita bread is an Arabic bread made originally with whole wheat flour. The bread is round-shaped and puffs up like a balloon in the oven. Although upon cooling the steam settles and bread is flattened. When you cut it into half, you see semi-circular pockets, they are called pita pockets.

How do you make it?

Making pita bread is actually very simple. Kneading steps can be done with hand or with a machine too.

Turn on the oven to pre-heat at 400-450 F before rolling the pita bread. (If you have a conventional oven that takes 20 minutes too pre-heat.)

Baking in the oven

Just before baking, I turn on the broiler element simultaneously with the bake element. This makes my oven as hot as a tandoor. (If both element do not work simultaneously, it will take a little longer to bake, and you will have white tops. But that's ok. )

(You can also make pita bread on the stove, and they puff up well on the stove. I'll soon update the post with stove top photos. Isn't this sight worth all the effort?

How to use it?

Pita bread can be used to make different snacks and sandwiches. You can use it to scoop dips and sauces like hummus or tzatziki sauce. Or you can make pita sandwiches by filling the pita pocket with gyros, falafel, veggies, kababs, and salads. Make a Pita bread roll with any chicken or vegetable filling to make a shawarma roll.

You can also make pita chips out of leftover pita bread by cutting the bread into triangles like you cut a pizza. Toast the pita triangle in the oven on a baking tray. Serve crispy pita chips with hummus, or tabouleh, or any dip of your choice.

Alternatively, you can also heat each pita bread on a hot griddle for a few seconds until warm. But this will make the pita bread slightly toasted and crisp on the outside. Lightly, toasted pita bread tastes great too.

How to make it Puff-up?

The tricky part of this recipe is the puffing of pita bread into a balloon. This puffing depends less on ingredients and more on the technique and temperature of the oven.

Technique: Your dough should rise properly. You must knead the dough balls for a few seconds each. Let the pita bread rest for 3-5 minutes before baking.

Oven temperature: The oven temperature should be at 450 F or above. Since you'll be opening the oven to bake pita bread, batch after batch. I suggest heating both the broil element and the bake element together. So there is a heat source at both as well as on the top. When they both work together the oven is super hot like a tandoor.

Hungry for more? Check these!

If you try this recipe, I'd LOVE to hear your feedback in the comments. Your 5-ratings motivate me to do my best. Stay connected for more recipes and videos on Facebook, Instagram, Pinterest and Youtube. 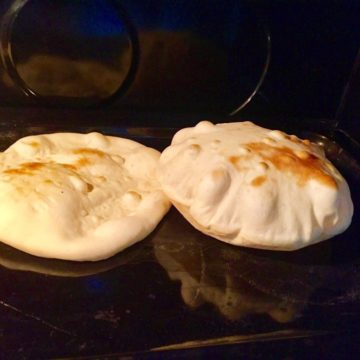