Ready for a smokey succulent authentic Pakistani chicken tikka? It tastes just like a restaurant and as if just coming off the barbecue pit. Marinate tikka ahead and cook it within 25 minutes!

This is one of the most tested recipes on the blog. The tandoori chicken is often referred to as Chicken Tikka Thigh or Breast in Pakistan.

Pakistani grilled chicken tikka is so dear to us that compromising on authentic taste was a crime. Most home cooks depend on chicken tikka spice mix for making tandoori chicken and the job is really easy like that.

When I decided to post this recipe, I wanted to include a tikka spice mix recipe too. Because many followers are skeptical about store-bought spices. So you can get the tikka spice mix if you want authentic taste hassle-free. The spice mixes often have MSG and artificial flavors for kicking taste.

Why does this recipe work?

So here is a visual of the ingredients.

Chicken tikka on the stovetop

Pro Tip 1: Do not overcook tikka, the meat shouldn't come off the bones. If the tikka is fully cooked and there is still water left in the masala.

Remove chicken pieces and keep them on a separate plate. Then burn excess water on high heat. Apply the dry masala over the chicken but do not overdo it.

Pro Tip: You can place the grill on the flame and grill 2-3 tikka together. Freshly tikka tastes best because most juices are locked in. Reheating can dry out the juices but they still taste delicious.

Coal barbecue and oven method in the recipe card.

Is tandoori and tikka the same?

Commonly tandoori chicken is bone-in and tikka is bone-less skewered chicken. Tikka is more accurately anything cubed and grilled like paneer tikka. Tandoori and tikka are also spice blends and have slightly different flavors. Tandoori is a milder flavor and tikka is a spicier flavor.

What to serve with Tandoori Chicken Tikka?

Can you bake Bone-in Tikka?

Yes! Bake at 350 F until fully cooked and charred. See detailed method in notes of the recipe card.

Can I marinate chicken tikka ahead and freeze it?

Yes! you can marinate tikka up to 4 weeks ahead and freeze it. Just defrost tikka by placing it in the fridge a night ahead and then place it on the counter 2-3 hours before cooking so chicken comes to room temperature. Then cook as instructed.

Hungry for grilled chicken? Check these.

If you try this Chicken Tikka, I'd LOVE to hear your feedback in the comments. Your 5-ratings motivate me to do my best. Stay connected for more recipes and videos on Facebook, Instagram, Pinterest, and Youtube. 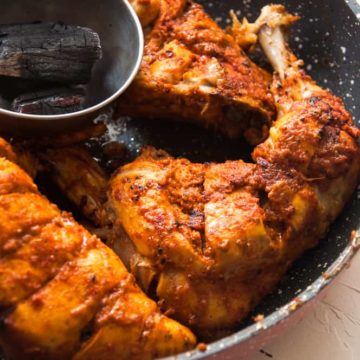 Marinate ahead: You can marinate tikka up to 4 weeks ahead and freeze. Just defrost tikka by placing it in the fridge a night ahead and then place it on the counter 2-3 hours before cooking so chicken comes to room temperature. Then cook as instructed.   Chicken Tikka in an oven: Chicken Tikka on the coal barbecue: Serving suggestions