I'm leaking all my best Biryani secrets tips that I've learned from friends, and people around me. Please give me a thumps up in comment if it helps.

Biryani is a feast and making it perfect is all about practice. These tips will help you know where to start and which areas to work on to get that perfect Biryani rice. 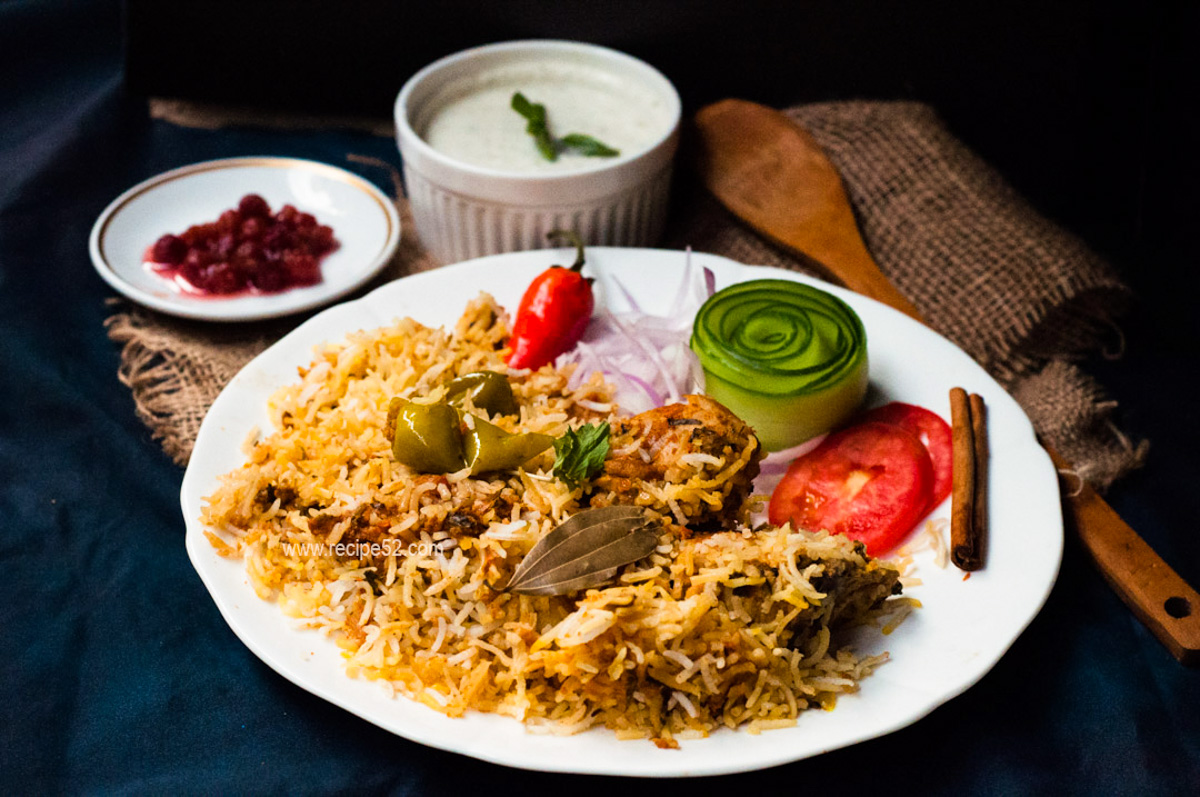 It is South Asian rice dish, made with layers of aromatic rice, meat, fried onions and yogurt and/or tomato. Ghee or oil is drizzled from topped and then the Biryani pot is sealed for steaming or 'Dum'.

Biryani is so popular is South Asian communities that every region and every family have their own version. 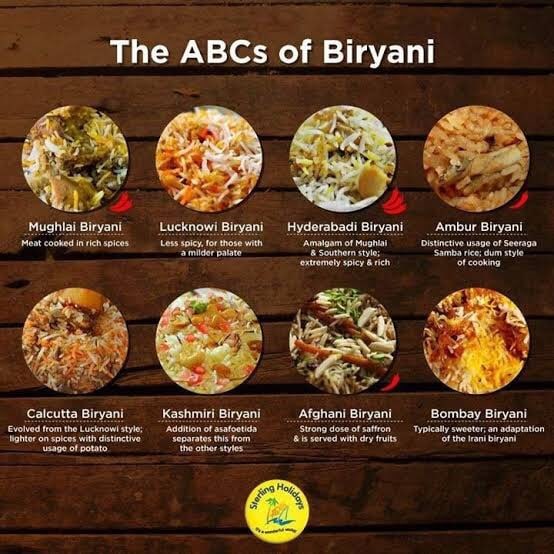 Some Biryani are named after region in which it is developed like Sindhi Biryani, Bombay Biryani or Hyderabadi Biryani.

My city 'Karachi' is famous for its Biryani throughout the world. Biryani is served here in almost every occasion. In fact, for most families Biryani is fixed on Friday Menu or at least Sunday. I can't think of living without Biryani for more than 10 days. So that's how dear Biryani is for Karachiites and me.

Difference in Pulao and Biryani 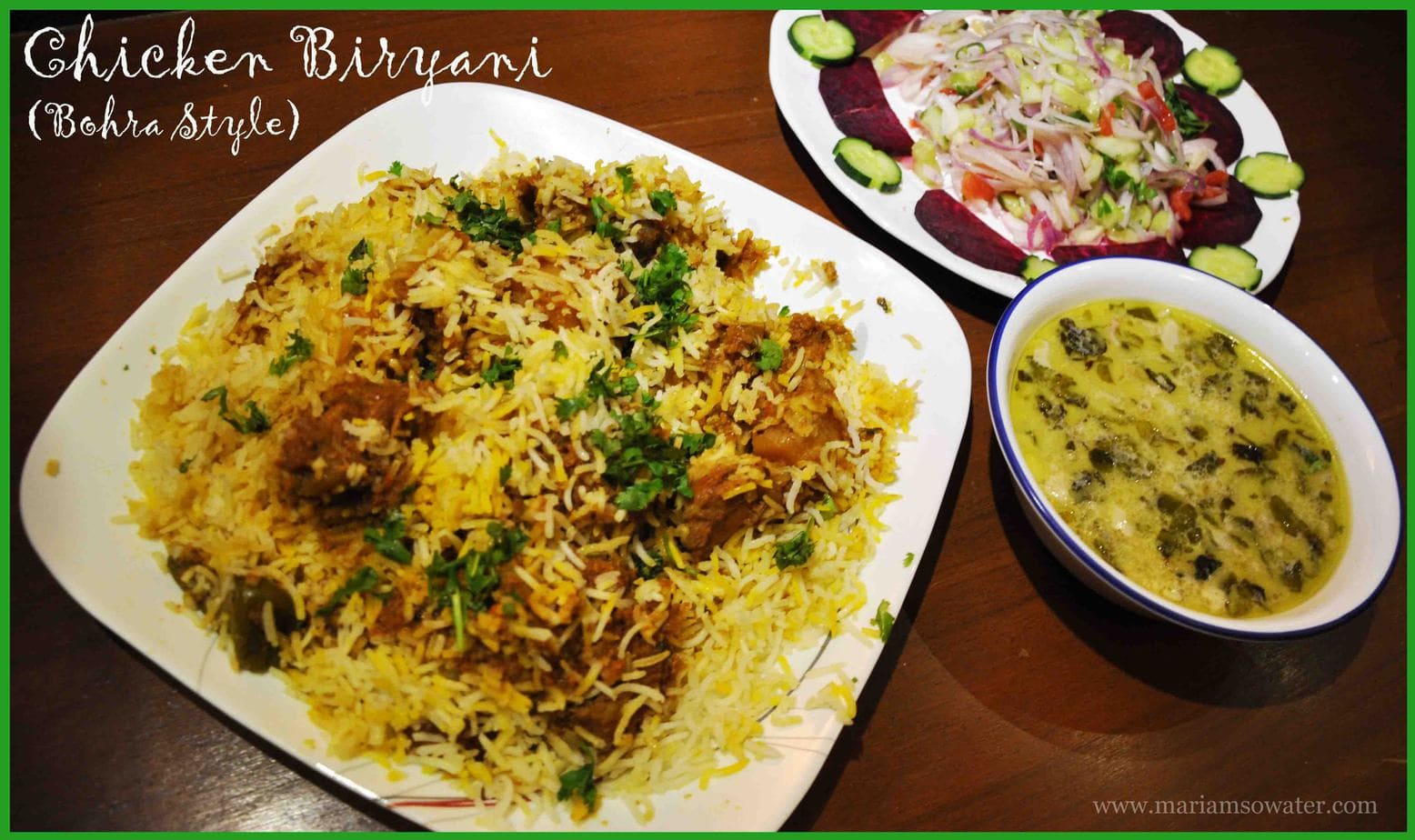 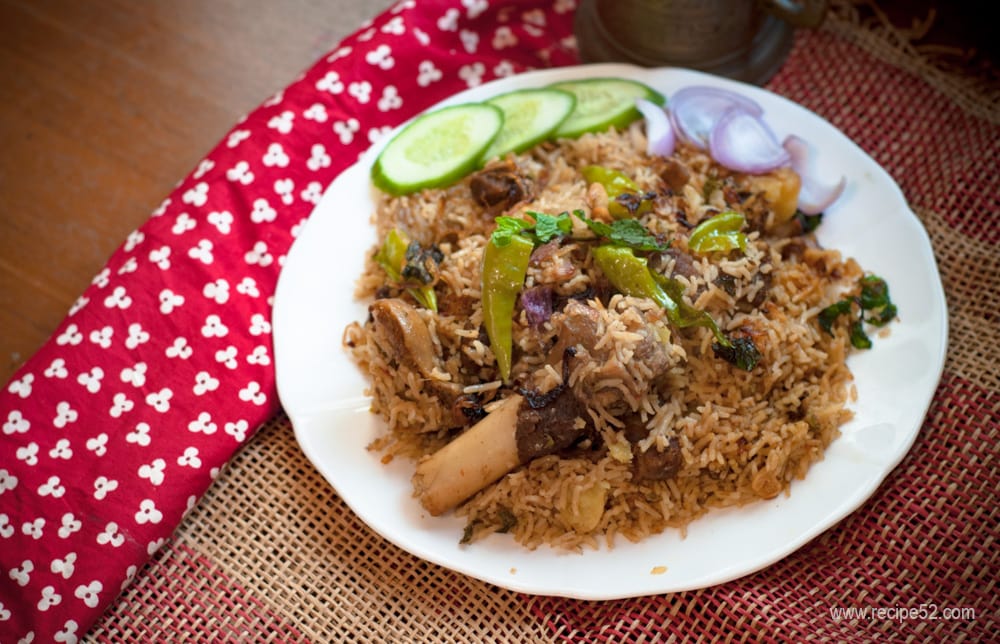 Having a general ratio of meat to rice before hand will keep you in pro position. You'll never face that meatless only rice stage of biryani pot when biryani about to be consumed completely. Sometimes, you have so much meat but everyone's asking for juicy biryani rice .

For rice measurement simple rule is to take equal quantity of meat and rice by weight i.e 1:1 ratio. That means 1 kg meat (chicken, lamb or beef) for 1 Kg rice.

Rice is main ingredient so quality of rice is very important, use basmati or other good quality long grain rice. 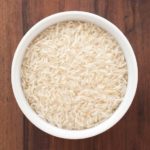 A good Biryani should have separate but fully cooked long rice grains. Type of rice is also significant, use basmati rice or sella basmati rice. Brown rice is good for pulao or khichri but not Biryani. Actually, basmati rice absord a lot of water. So when you boil rice in spiced water. Basmati rice grains absorb flavor and aroma adequately. 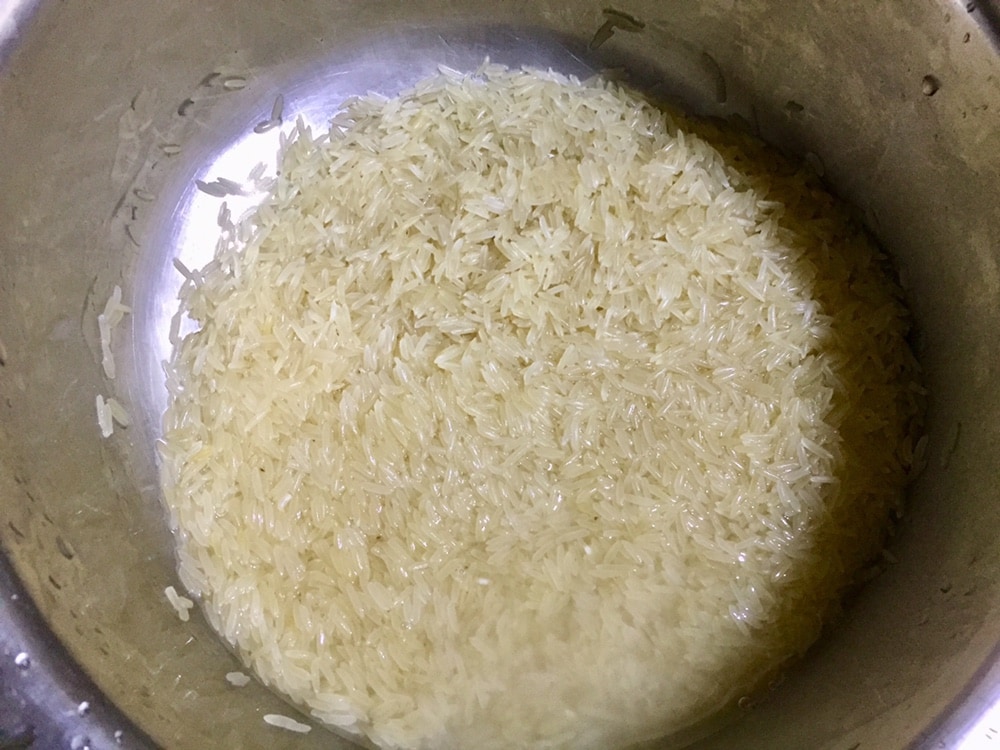 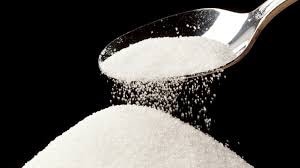 Salt is most important taste enhancer in any food. If your rice lacks in salt, biryani will lack completely in flavor. To know whether the salt is enough in water for boiling rice, taste the water, it should have a soupy salt level.

Salt is most crucial in flavor of every food make sure you use salt in all steps; marination of meat, making gravy and frying potatoes. But that's doesn't mean you over do.

Always use a wide and thick bottomed pot for Biryani. You can also put rice pot on griddle/tawa if your skillet has thin base; to save rice that are at the bottom of pot from burning. Keep the griddle/tawa under the skillet for re-heating biryani too. Always re-heat biryani on medium or low flame.

For perfect biryani look every grain of rice should be separate. The overcooked meshy rice is nightmare for any biryani lover. Make sure rice are semi cooked about 70% cooked. After soaking, boil Basmati rice for 10 minutes or less.  Always check for visual signs.

One tip to test doness of rice is to mesh a grain of boiling rice between thumb and finger to check doness. You should have two tiny 'Kani' bits of unmeshed rice left. That is called '2 Kani chawal', and considered ideal for biryani. Rest of rice cooking happens in Biryani pot where rice absorb flavours of meat and spices.

Cooking time can vary upon type of rice so checking the pack for instruction is best way to know.

Biryani rice are flavored with spices and are full of aroma. This is attained by boiling rice with whole spices and salt in large pot with plenty of water.

Best way to do this is boil water with salt and whole spices like cumin, cardamoms, pepper, bay leaf etc. Stir well till you see a little change in color of water. Then add soaked rice and cook for 10 minutes or less until rice are 70% cooked or reach '2 Kani' stage.

If you are new to Indian cooking you'll like next few tips. Whole spices like pepper, bay leaves, cardamom are for aroma only, they release their juices and flavors in rice. Do not bite them. Just put aside like you do with bones. 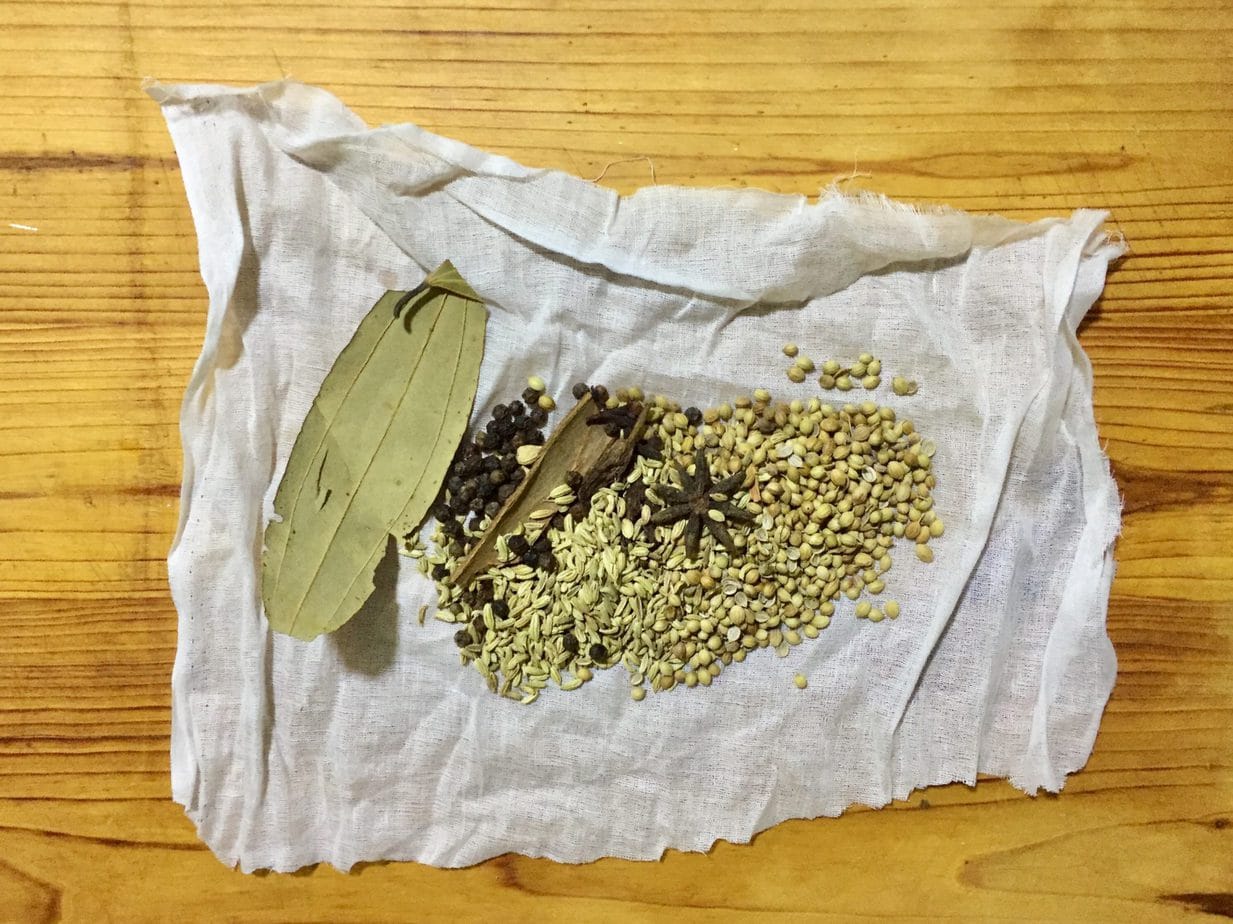 If you don't like whole spices in rice, you can also wrap these spices in a muslin cloth to form a spice bag. Just remove spice bag before serving.

You can make korma gravy of Biryani a few hour ahead or even a day ahead. In that case the fried onions will puff up and soak water so add ¼ cup extra water or more if gravy is too dry. Korma gravy should have thick juicy gravy. It shouldn't be dry.

Bhonofying means cooking on high flame till most water dries and oil clearly separate on sides of pot. This step is most crucial through out Pakistani cuisine. If you Bhunofy it correctly, it will be finger linking good. Only problem for bhonofying is you need to add a bit extra oil so it gravy or korma doesn't burn.

Steaming is most important step of biryani making. When you assemble meat and rice with other ingredients in biryani pot. The rice that are under cooked absorb the gravy moisture. As the pot gets heated the moisture from gravy rises and form steam. This steam needs to be trapped in the pot so rice puff up in this aroma filled steam. This is called 'Dum' technique of biryani.  To achieve this you seal the pot by one of these ways. 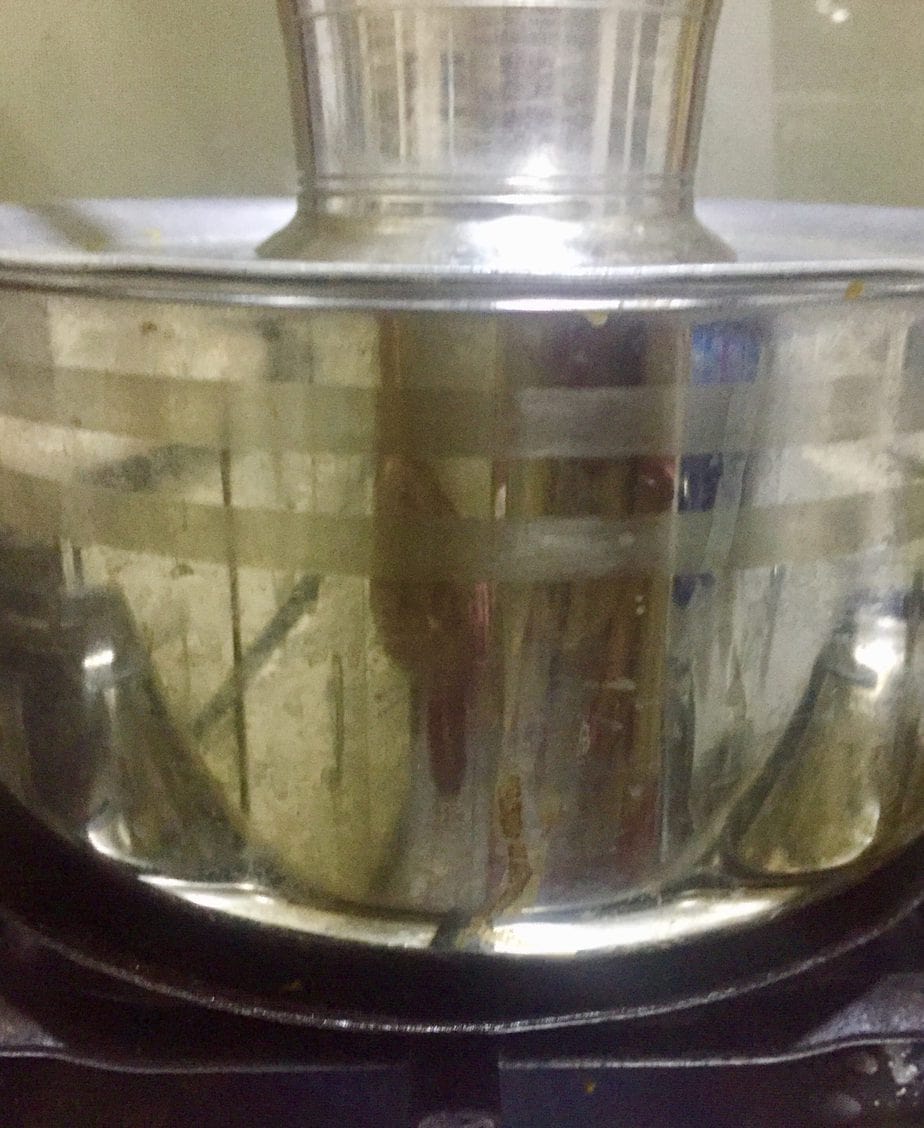 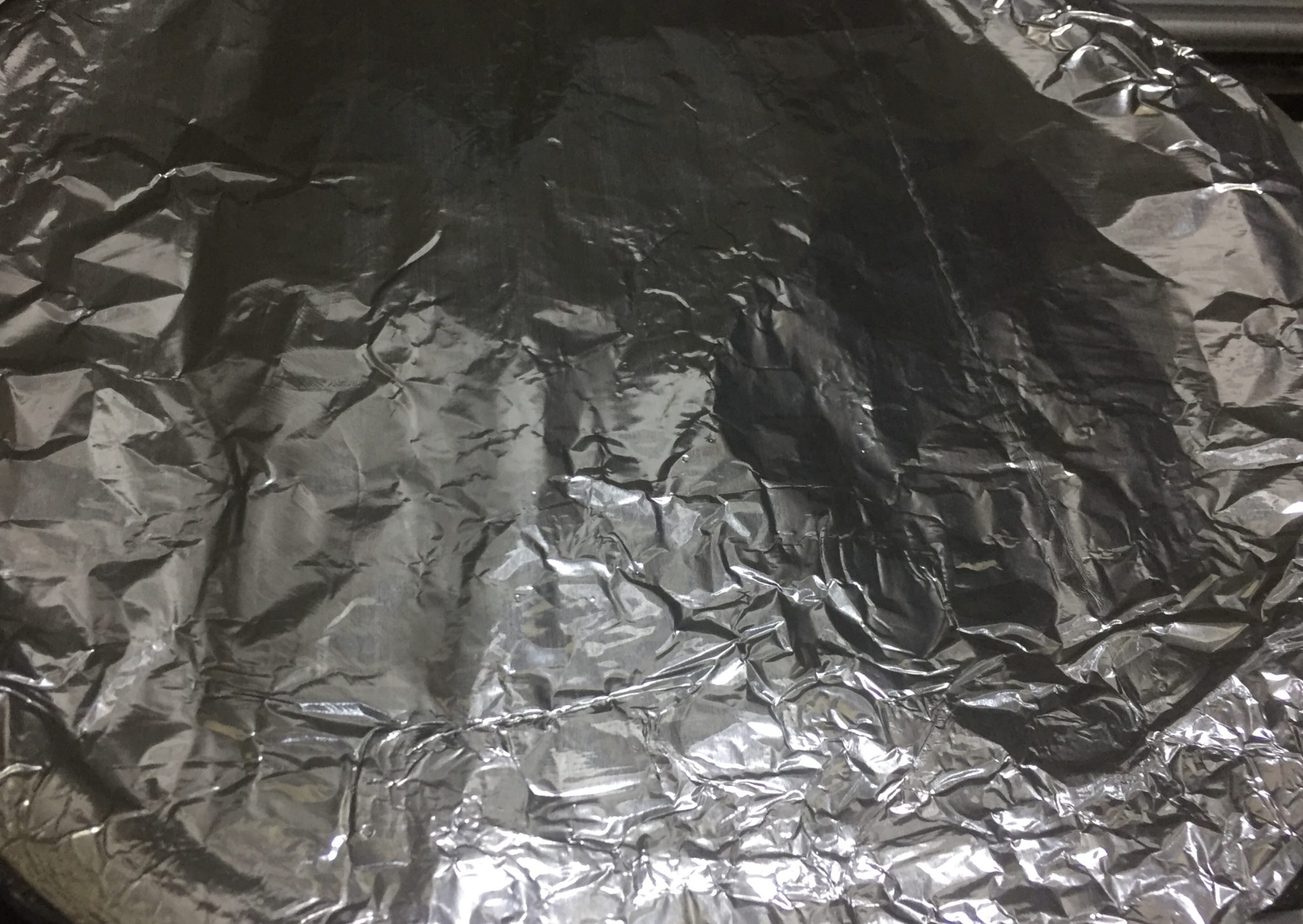 11. How to fix Hard and dry biryani rice.

Now, we all have bad cooking days when you have under boiled or over boiled rice below is the tips how to handle.

If your rice are very hard which mean they are under cooked when assembling the Biryani pot, you can add extra water in dum to soften but remember the gravy also has some water.

If your rice turn a bit softer or over cooked. Dry out your Biryani gravy also called korma a bit and add little or no water in Dum (Steaming). Also don't leave Biryani for very long on Dum. 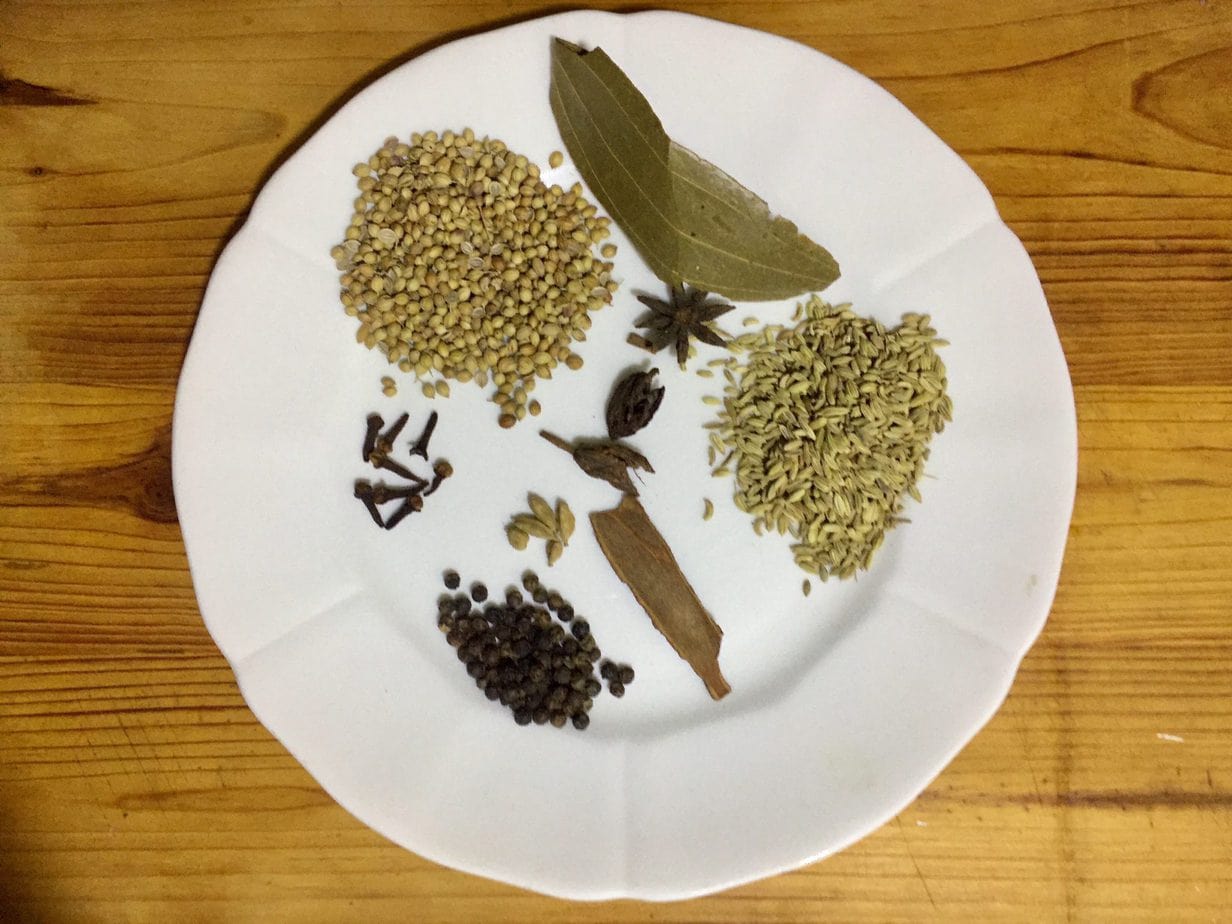 If you don't have one or two spices like, bay leaves and black cardamom, its ok. You can skip them. And use garam masala powder or chat masala or just extra green chillies. Although, some spices like black cumin and saffron really change the aroma and taste of biryani. But, if you have just few basic spices, like cumin, turmeric, pepper and cinnamon etc you can begin Indian cooking with these. 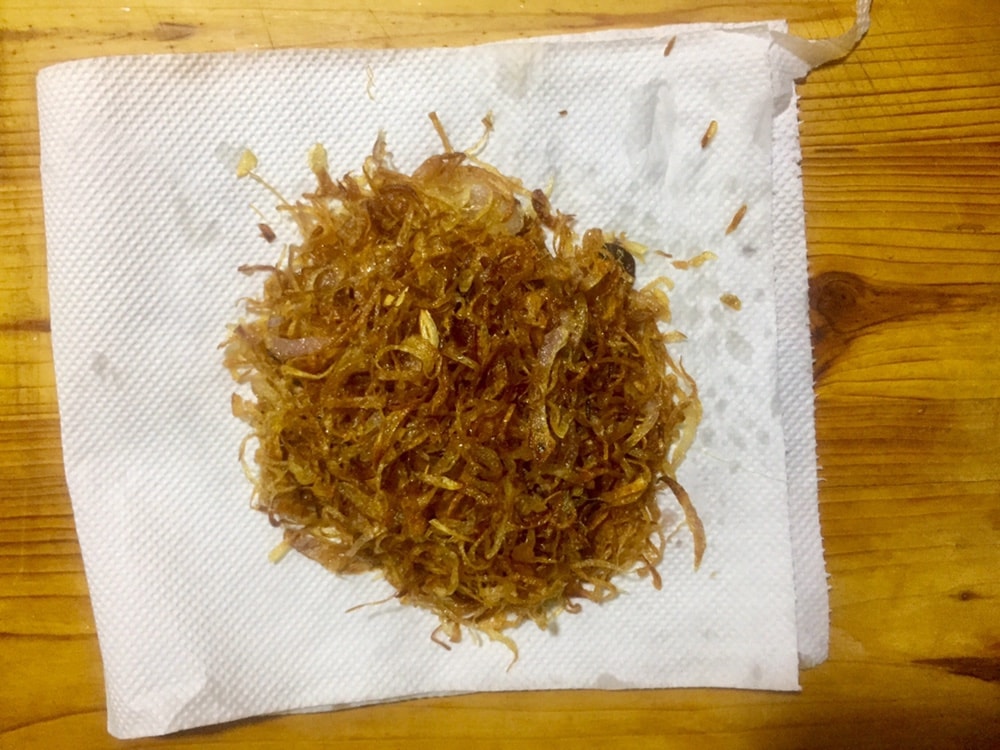 Neither dark nor soggy; since, we use tons of fried onion in Biryani, if your onion slices are over cooked, dark or burnt your Biryani will taste burnt and will have dark stale color. If onion slices are under cooked and not golden, they will not be delicious. 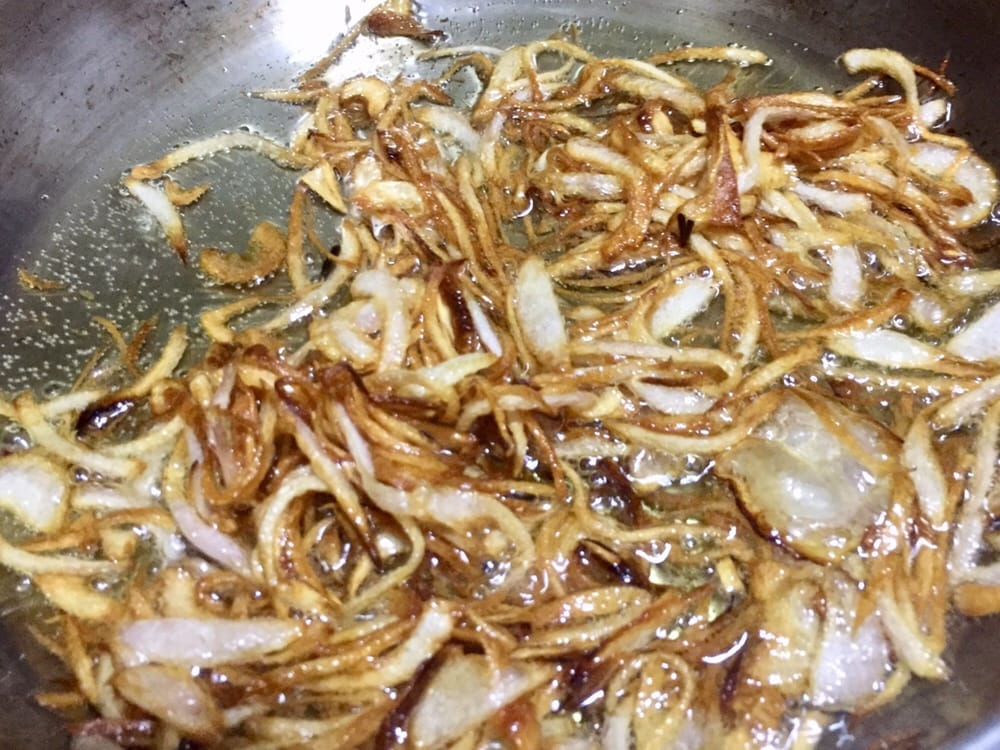 One visual sign is as soon as your onion slices start to separate clearly in oil with light golden color, they are ready.

Another useful and general tip for frying crispy onions is onion slices should be very thin. Deep fry onion slices in large pan or wok over medium flame. 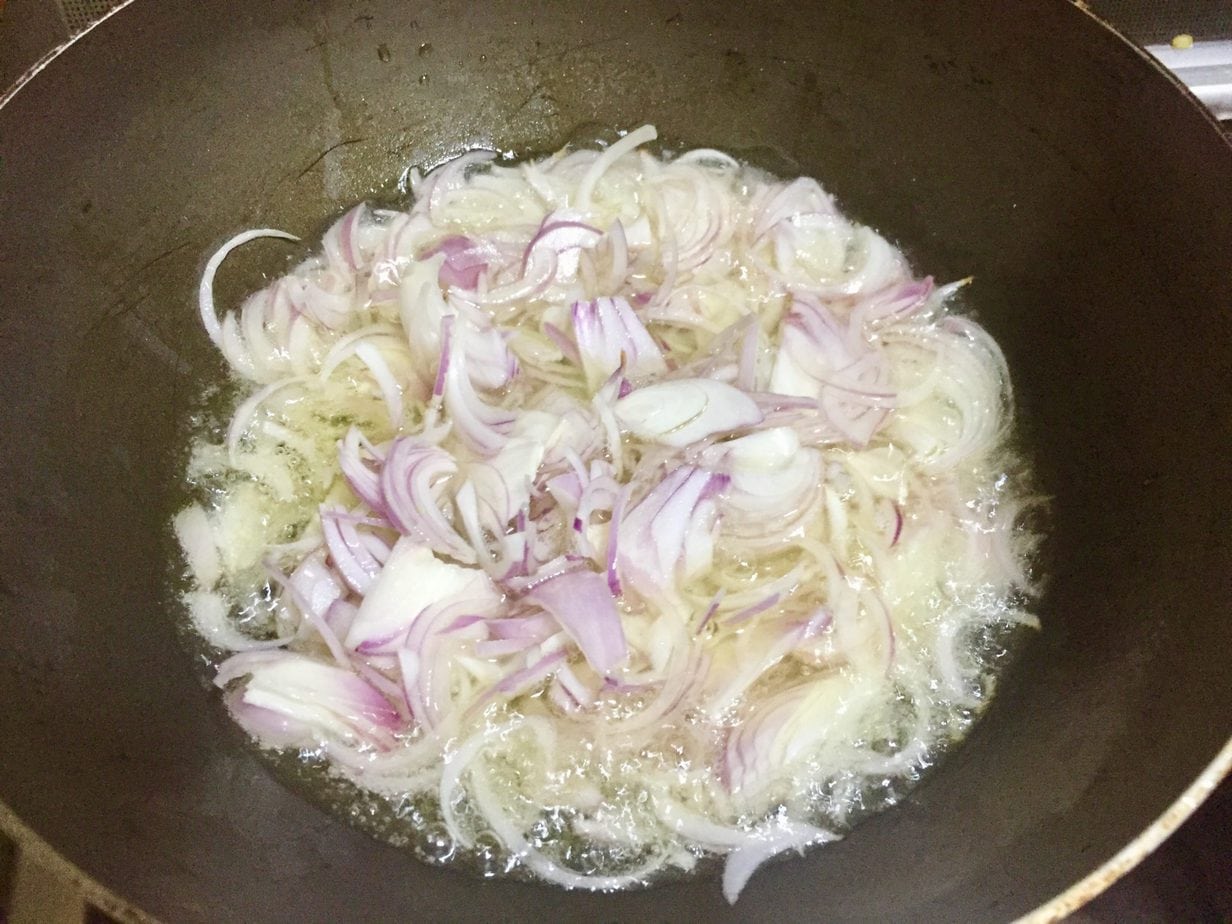 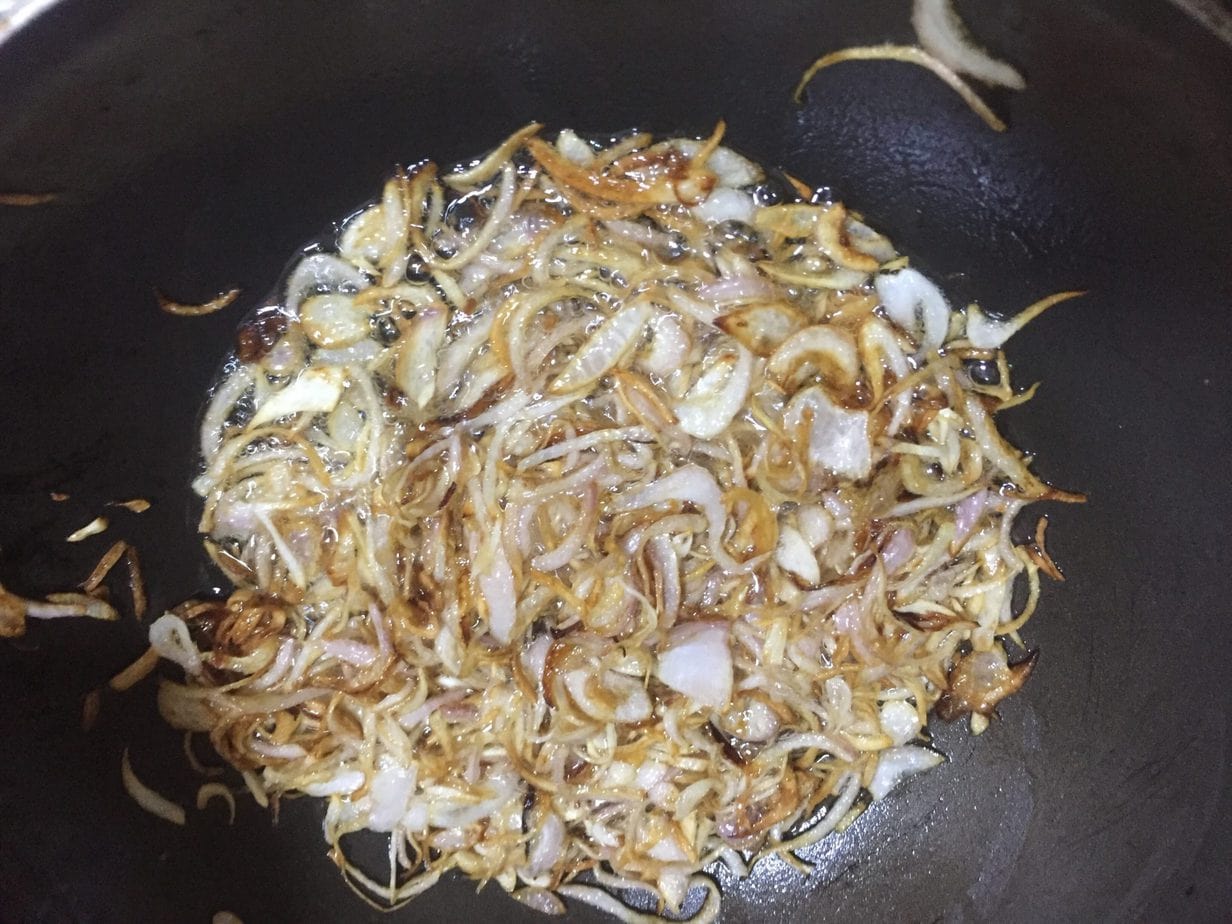 After onions slices start to separate like in above photo. Pick them with slotted spoon and transfer over a strainer. 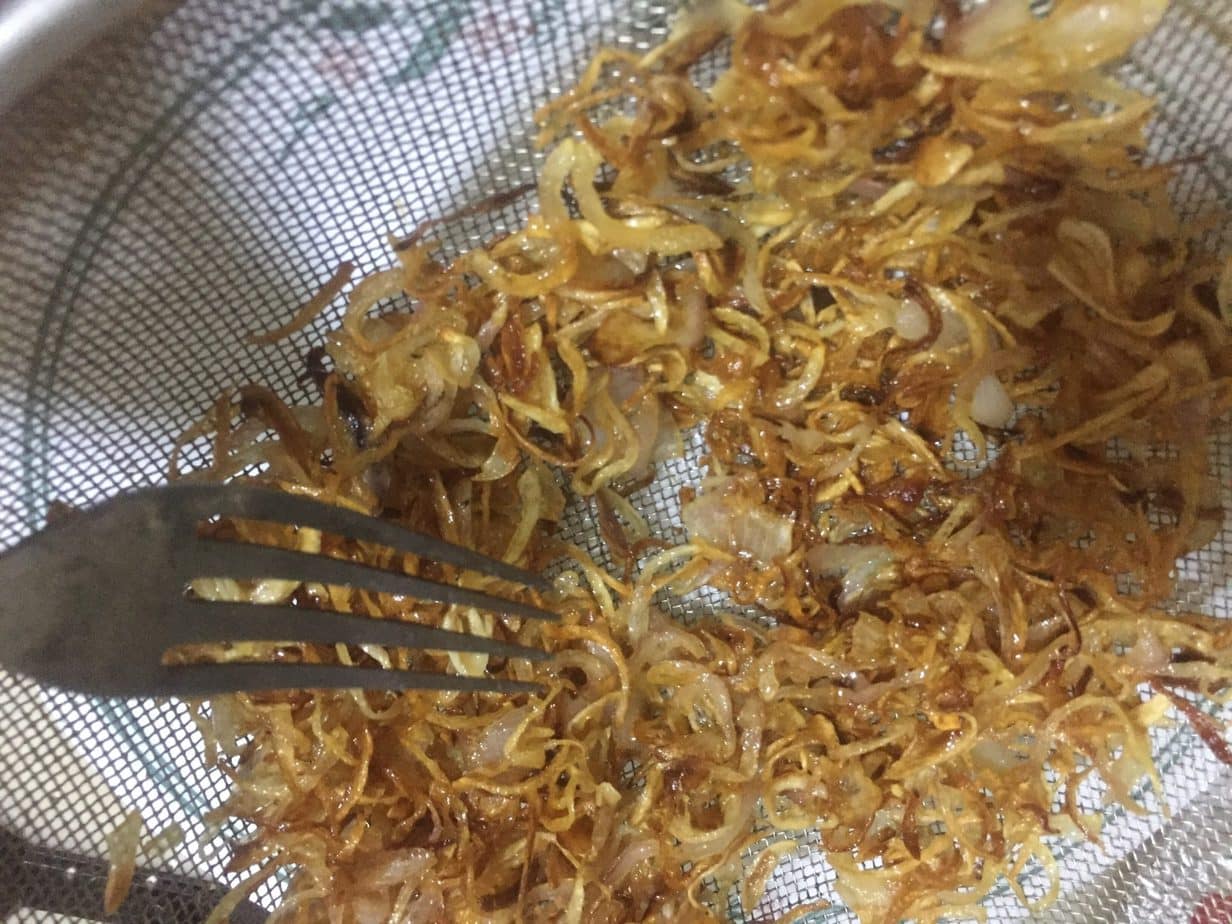 Shake the strainer to cool onion slices and shed any remaining oil lingering over it. Transfer slices over kitchen towels to cool completely.

Now use as required in a recipe. They'll be crispy and you can crush them with hands. You can store these in an air tight container for later use. Fried onion make great garnishing over almost any Indian dish. 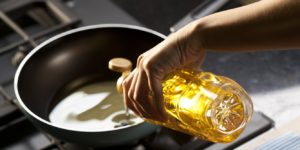 The oil, I use in my recipes is least possible with authentic flavors but real biryani calls for even more oil or ghee. So be generous in oil when making Biryani. When traditional mutton biryani is cooked, fat pieces (riwaj) are also added with meat for meaty flavours and greasy moisture. This is 'degi' or 'Dhaba' Biryani secret tip.

Another important thing about Biryani is estimation. As Biryani is often made for 'dawat' or formal dinner having a correct estimation of meat to rice is critical.

Or how many kilograms of Biryani for a certain number people can really help overcome stortage of food that is so embarrassing. Or wastage of food which is so difficult to distribute or dump in the worst case.

But these estimate need to be adjusted if all invited are youngster with large appetite or oldies with small appetite.

One very old and traditional method of measuring rice for serving is a fist raw rice for each person. 1 and half fist of raw rice for people with large appetite and ½ fist for children. You measure rice according to invitee and soak rice. This seems crazy way to calculate and quite secret way used by grannies but works very well.

If using above methhod, most of calculation of meat, onion and potato and other ingredients are done with visual estimation. These advanced cooks only follow the method of a recipe and don't care about measures. But this is advanced cooking level, not recommended for newbies.

Indian / Pakistan food is all about combos. Raita ( yogurt sauce) is must with any Biryani. A little effort will show high rewards in term of praises like 'wah' , 'maza agaya'

Lastly, if it still isn't perfect. Remember, a pot of freshly steamed rice and meat along with kachumber salad, raita and a few chutneys here and there can never be boring. So that'll surly save the day. 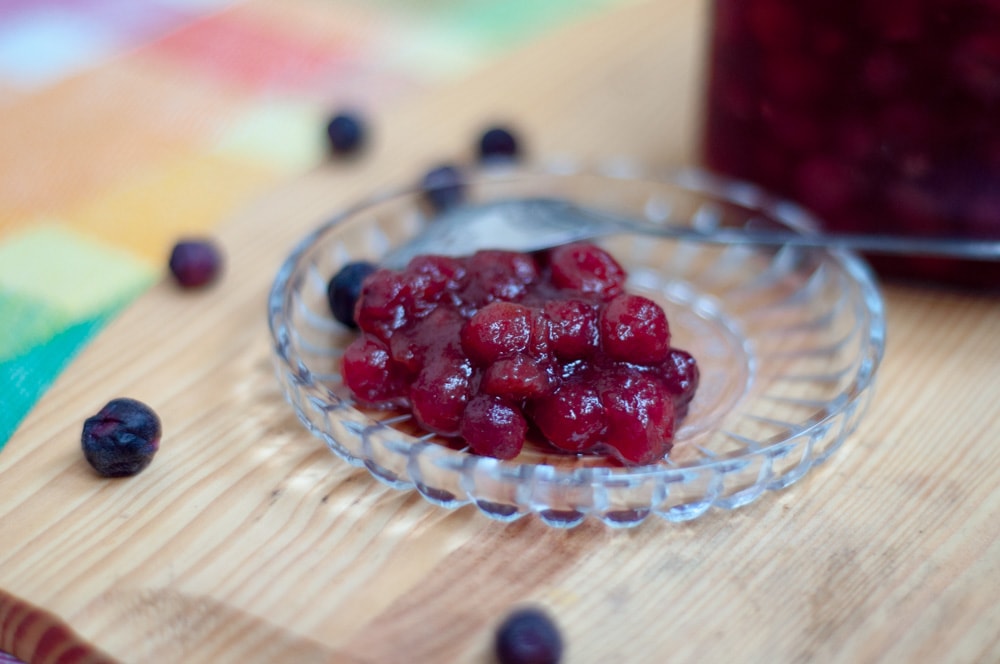 A little common sense and bit of experience will make you pro biryani cook. Good Luck and don't forget to give ?? in comment if you enjoyed the post.

Pin it to read later! 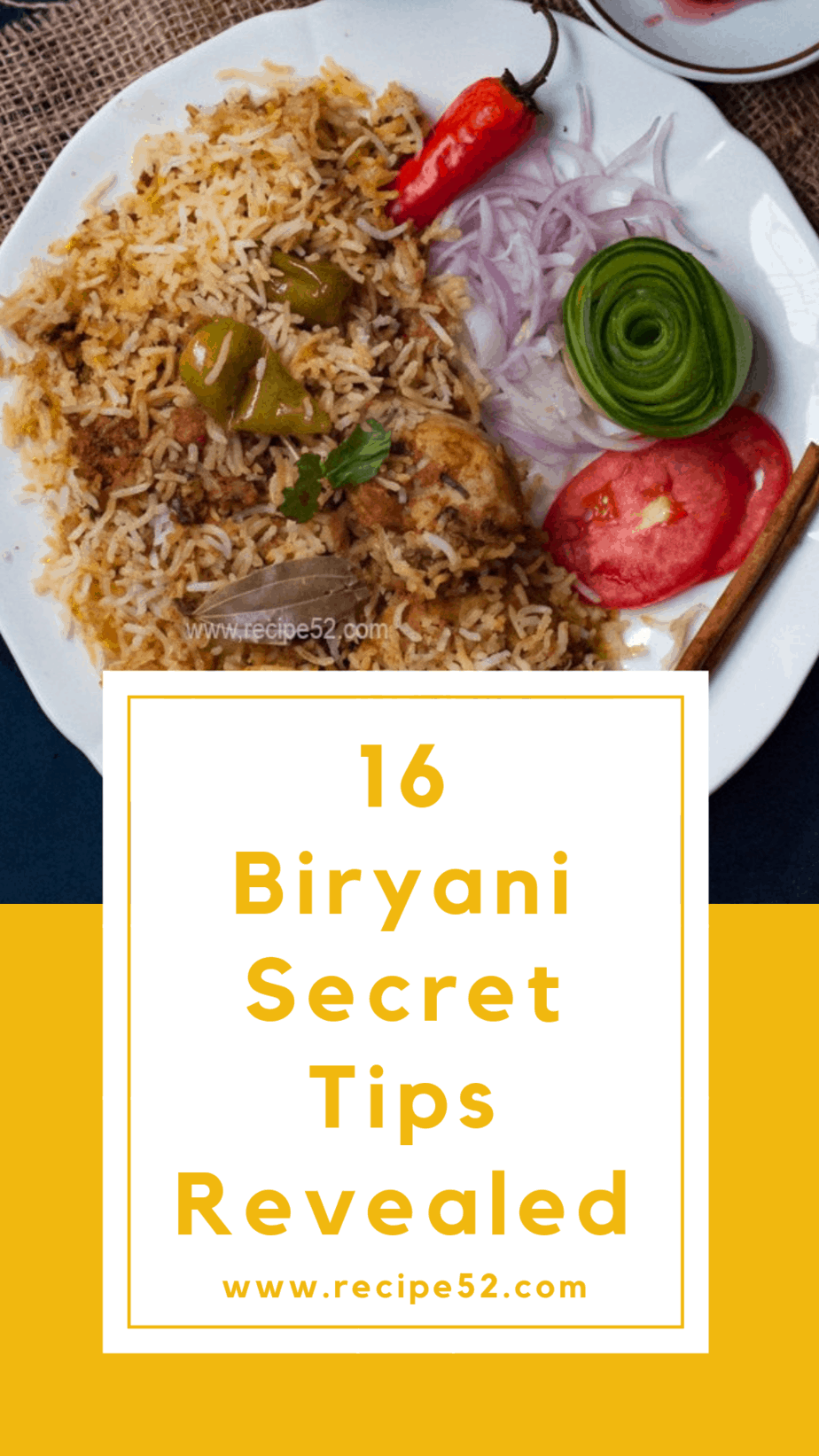 Are you a pro Biryani cook? Share your tips in comment and help others.  Check my biryani recipes.