This is a detailed recipe for Pakistani Chicken Biryani and delicious too. But wait, if you are in any case looking for Pakistani or Karachi style degi Biryani that you had at a restaurant or on the street or in a wedding dinner; that is different. I will post a separate recipe for that.

This is home-style, hearty biryani with delicious flavors full of herbs and aroma. I suggest, serve it hot right after dum (steaming) with raita and kachumber salad for best taste.

In Pakistani, especially Karachi, Biryani is often made on Fridays or on weekends; also in official dinners or weddings or picnic or whatever; biryani fits in all events. And, it’s always good, never boring.

People of Karachi can’t live without Biryani. Like, even if we are traveling somewhere in China or Far-east, we’ll find a Pakistani restaurant or maybe an Indian restaurant and eat Biryani. And, the satisfaction is heavenly.

Hungry for Rice? Check these recipes!

Marinate with spices and just 4 tablespoons of yogurt. Mix well and let it sit for 20 minutes or preferably overnight. (This step makes chicken soft and juicy.)

Wash rice and soak in water for 20 minutes or as suggested on the pack. (This step is important as it allows the grain to expand at it best and also reduces the cooking time of rice with even cooking, Go for best quality rice here!

Boil water with all spices and salt. Mix well, add soaked rice. Cook until 70% is cooked. (2 kaani chawal). (Tip: The water should be aromatic. Once the water is fully boiled and has changed color you may remove big spices with a slotted spoon only if you hate whole spices.) Not recommended.

Put a little oil on rice so rice grains are well separated. Set aside.

Other Preps, while the chicken is marinating and the rice is cooking.

While rice cooks, fry your potatoes in oil with a pinch of salt. The potatoes should be fully cooked, insert a fork to check. (Tip: You can also boil the potatoes with a pinch of color and salt instead of frying. Some people fry potatoes after boiling.)

Fry onions in same oil until golden, cool the until on kitchen towel then crush it with hand or grinder. ( You can also use 1 packed cup of pre-fried onions in the recipe and skip this step.)

Remove extra oil from wok in which we fried potato and onions and leave only ½ cup oil. Fry marinated chicken in that oil for 10 minutes until oil separates.

In this photo, you can see the color of chicken is changed and a little oil has separated on the sides of the pan.

Now, add tomato puree, you may add sliced tomatoes if you like whole tomatoes in biryani.

After adding tomato puree, mix well and cook further for 10-15 minutes on high flame until water dries and oil separates. (Bhunofy) This step is important. After the oil has separated add remaining 3/4 cup yogurt in the chicken. Mix well.

Mix in all the remaining ingredients, herbs, fried potatoes, green chilies and prunes.

At this stage, add gram masala powder for strong aroma. Gravy for biryani is ready. (Most important tip. We want thick and runny gravy for biryani and not dry. It is the gravy that gets absorbed in rice and provides flavors. If incase gravy is dry add a little water and make it runny.)

Now divide chicken gravy into two parts. Add 1/2 of it in this layer. (Evenly divide and layer the chicken pieces, potatoes, and gravy in this layer.)

Again add ⅓ layer of rice. (In this photo you can clearly see my rice just 70% cooked and separated.)

(We avoid color and essence for we love only natural stuff with no colors and no artificial flavors until really necessary.)

Seal the pot with foil, ( damp towel or thick cloth, all four ends are tied over the lid.) Cover tightly with the lid. (This sealing technique of rice is called ‘dum dena’ in Urdu.) Dum helps the rice cook completely while absorbing the flavors of gravy and with drizzled oil. Serve hot with salads and chutney. 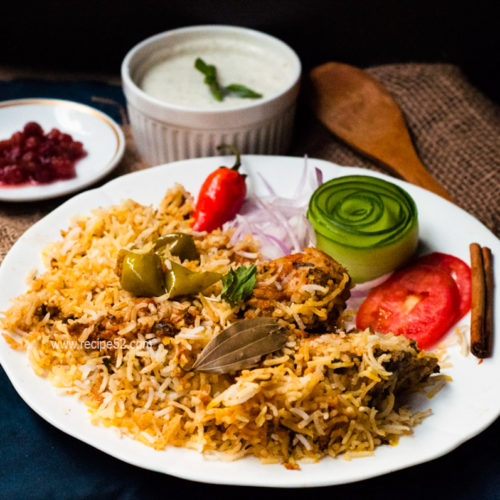 Rice are most important thing in biryani. Boil rice should be aromatic with spices. Make sure your are under-cooked when you boil because we’ll cook again for 20 minutes. Searing ( bhunofying) is most important step in making gravy.The yogurt you add later with restore water content of gravy but if your gravy is too dry add little extra water.
Tried this recipe?Mention @Recipe52 or tag #Loverecipe52!
Pakistani Chicken Biryani Recipe