Chicken Nihari Recipe originated around the end of eighteenth century in Nawab’s Kitchen. (Nawabs were semi- autonomous rulers of princely states of South Asia in Mughal times and also after that period.) After Partition of India and Pakistan, the dish got extremely popular in Pakistan, specially in Dehli and Karachi. Karachi foodies love spicy food and Karachi Nihari is all about spices. Here’s you can read more about nihari at Dawn blogs.

What is Nihari called in English?

Nihari comes from Urdu word Nihar, which means morning. In those time Nawabs would have Nihari in breakfast. There is no particular word for nihari in English but it is basically a smooth flour based spicy beef stew.

Traditionally, Nihari was cooked overnight for 5-6 hours and served in the morning. Today, when people move to healthier and easier options for breakfast, Nihari is eaten more frequently as main course than breakfast.

Which meat is best for Nihari?

What is Nalli Nihari?

After nihari is cooked, bone marrow is taken out of nihari and added in serving bowl. Like, you serve nihari in a bowl, then add soft fatty extract of bone marrow (bone is discarded) on top and finally, you add garnish and tempering. This is called nalli nihari. So Nihari with nalli (bone marrow extracts) is nalli Nihari. Simailarly, cooked brain is also served over the Nihari, it is called Maghaz nihari. ‘Maghaz’ means brain in Urdu.

With innovations in cooking and growing consumption of chicken. People also make quick and easy chicken Nihari at home.

Which flour is used in Nihari?

Usually, whole wheat flour is used to thicken nihari gravy, but some people also use plain flour. If you want to make gluten free nihari you can use any gluten free flour to thicken nihari till desired consistency is reached. For a Keto Nihari, you can use almond flour to thicken the gravy. Corn starch or Corn flour is usually not used. Because cornflour doesn’t provide the nutty flavor that you get by roasting wheat flour or cooking wheat flour for very long. Hence is cornflour is not recommended.

My other similar recipes

How to make Chicken Nihari ? 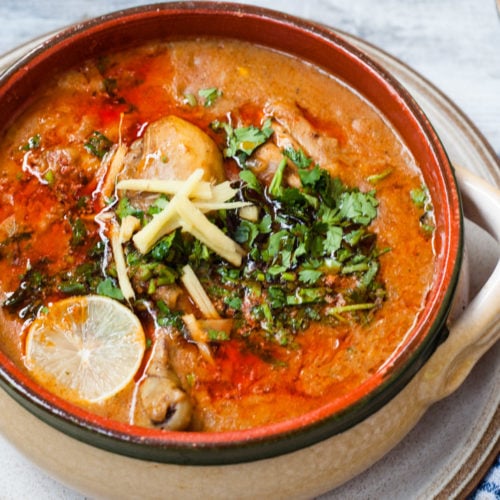 Nihari Masala Ingredient: (We need only half of this spice mix for this recipe.)

Try to make Nihari 4-6 hour ahead and let it sit for several hours for enhanced flavours.
You can substitute my Nihari masala with store bought Nihari Masala to save time. Add more masala if needed.
If you make Nihari frequently , I suggest double or triple the recipe and make big jar of spice mix and store in fridge or freezer. This stays good for up to a year.
Tried this recipe?Mention @Recipe52 or tag #Loverecipe52!
Chicken Nihari Recipe

Take whole spices in a pan and dry roast for a minute on medium heat.

Add powdered spices, and roast another for 2-3 seconds. Remove from heat and transfer to a food processor.

Grind into a fine powder.

Sieve the spice mix through a fine strainer. Grind the remains left in the strainer once again. Sieve once more and discard the remains.

(Fennel seed are difficult to ground smoothly and they will spoil the texture of nihari. So sieving is important.)

You’ll need only 2.5 tablespoon of this spice mix for this recipe.

Heat oil in a vessel and add chopped onion.

Mix and cover the pot, cook on medium heat for 5-7 minutes. (Adjust heat if needed.)

The onions are very soft now and and very likely to dissolve easily.

Cook on high flame for 3-5 minutes until color of chicken changes, then add 1 cup water.

Cover and cook the chicken for 10-20 minutes on medium until tender.

While chicken cooks, roast wheat flour in a pan until fragrant. Transfer flour to a bowl. (For a gluten free or keto nihari, you can use gluten free flour or almond flour respectively.)

When chicken is cooked add yogurt.

Add lemon juice, and let the nihari simmer for few minutes. A little layer of oil will rise on the top.

Fill Chicken nihari in serving plate , garnish with corriander, chillies and ginger slices. Then heat little butter or ghee in a vessel and add a pinch of kashmiri chilli. Pour heated butter over nihari and serve.

Pin this image for later reference!