Looking for an easy, tasty, and the best chicken korma recipe that is made in just one pot? This authentic, repeatedly tested recipe, bursts with desi flavors. You just need 40 minutes to make it. Taste so good! Scroll down to see the photos!

Update: The post was originally published in 2017. The recipe is fully updated with new photos and a repeatedly tested easier and tastier recipe.

In broader terms, as Gordan Ramsay puts it, Chicken Korma is a South Asian dish featuring chicken or meat in a rich spiced sauce made of cream or yogurt or coconut cream.

Korma originated in the Mughal kitchen in the 16th century where spices and nuts were profuse. This recipe shares the authentic Muglai Chicken Korma, often called Shahi Korma, (shahi means Royal). Many other recipes developed in that time like Haleem, Biryani, and Shami kabab.

From there Chicken korma spread to other regions including Uk under British rule and further when South Asian immigrant took their heritage around the world. 5 centuries later the Korma has many variations and many versions.

Now, what we will be discussing here is authentic Pakistani Chicken Korma (or qorma) which is a moderately spiced yogurt-based curry. It is rich with spices and nuts; kewra or saffron is also added for aroma. As qorma, Korma literally means fried meat. Pardon me for a little extra oil.

What makes this recipe authentic?

Did you see that close-up above? An incredible Chicken korma that I know as a born, bred, and residential Pakistani, who learned cooking from previous generations not online, has these qualities.

Now you know the prerequisite of a good authentic Chicken Korma, let’s dive into the ingredients. The image is self-explanatory and most ingredients are common so I’ll skip further detail.

I wish I can express in words how many times I tried this recipe and how much research, I did before I could claim it as the most authentic version of traditional Pakistani chicken korma.

I'm so proud of this! Yummy Chicken Korma is ready. This taste is so satisfying with taftaan and sheermal.

How to store Chicken korma?

Chicken Korma can be stored in the fridge for 2-3 days. Or you can freeze it for 2 months. The profuse amount of oil makes it good for tin packing as well.

What to serve with korma?

Korma is served with taftan, naan or sheermal. However, it tastes great with roti and chapati too. Pair it with some fresh salad and desi meetha like Kulfi or kheer.

Can I use a pre-made spice mix?

Shan masala or national are 2 widely used brands. Skip all whole spices and dry powdered spices and use just 1 ½ tablespoon of the spice mix. Add more if/as needed after tasting.

I took this photo while testing the recipe without cashew. The texture is still good. I added this to show you Taftan (left) and sheermal (right).

Hungry for Chicken Curries? Check these!

If you try this Chicken Korma recipe, I'd LOVE to hear your feedback in the comments. Your 5-ratings motivate me to do my best. Stay connected for more recipes and videos on Facebook, Instagram, Pinterest, and Youtube. 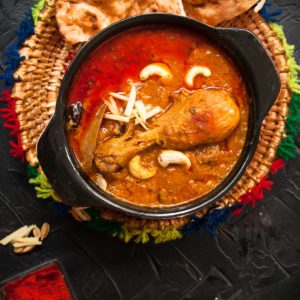