Chapli kebab is the king of all kababs. It has a crunchy texture and tangy and nutty taste. It is full of aromas and bursting with flavors.

Chapli kabab is a specialty of Pukhtun Cuisine, the food of Khyber Pakhtunkhwa, a province of Pakistan. These chapli kebabs are also called Peshawari kabab named after Peshawar, the capital city in the same province. You can learn more about chapli kabab here!

The word chapli is derived from chaprikh which means 'to flatten' in the Pashto language. The kebabs are round and flattened minced meat cutlets with coarsely grounded spices and chopped tomatoes.

I just love kebab because they are high in protein and loaded with a good fat as Draxe.com call them. Here are more Pakistani kebabs like keema cutlets, keema samosa, shami kebab, and seekh kebab.

Why this recipe taste so good?

Below is an image of spices and veggies that go in the kabab marination. Apart from it tomato, cornmeal, and egg are also added which is visible in the steps image.

Overall the chapli kebabs are quite easy to make. I know, the making of spice mix is a bit of extra effort but you can make it ahead. And the taste of freshly roasted spices is bursting with flavors.

Honestly, I'm a big fan of chapli kabab and I can eat all of it alone. Spicy mint coriander chutney or tamarind chutney or raita pair well with these kababs. Traditionally, these are served with tandoori naan.

But they taste great with rice too like afghani Pulao. They pair as great protein side with daal chawal too.

Why do kabab break?

A lack of fat in mince can make the kabab dry and break. Make sure the mince has 20%-30 fat. The lack of a binding agent can also cause the kabab to break. The usual binding agent for chapli kabab is flour, usually wheat flour or cornmeal. Lastly, if you add tomato to the marination. Tomatoes will release excess moisture and break the kebab while frying. So make sure to add tomatoes just before frying.

How to fix breaking chapli kebab?

If your chapli kabab is breaking while frying, you can try one or both of the two tricks. If the mince mixture is too moist add extra flour to bind it. Or if the mixture is stiff and can absorb little moisture, add a few tablespoons of a beaten egg. Do not add whole egg altogether as this will make the mixture too soft and difficult to roll into kabab. So go slow adding just one tablespoon at a time.

Is Chapli Kebab good for keto?

Since these are high-fat kabab, they can make a great keto main course. Make sure to reduce or skip onions and tomatoes. Use almond flour instead of cornflour as a binding agent. Also, add extra bone marrow pieces and or in the center of the kabab when you roll it. Some people also add scrambled eggs to the raw mince to mimic fat like the taste.

Chapli kabab is a large and flattened ground meat patty. It has a crunchy texture due to coarsely grounded spices. Tangy and nutty taste that comes from dried pomegranate aril. It is very more flavorful compared to other kabab.

If you try this chapli kebab recipe, I'd LOVE to hear your feedback in the comments. Your 5-ratings motivate me to do my best. Stay connected for more recipes and videos on Facebook, Instagram, Pinterest, and Youtube. 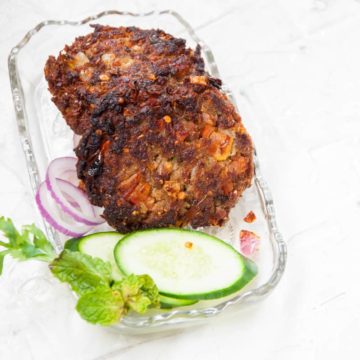