When creamy mince stuffed potato balls and enveloped in a bread crumb crust, the resulting delicacy is called Aloo keema cutlets or aloo keema Patties or aloo keema Tikki and sometimes also aloo keema kabab. Amongst Gujarati communities, it is called Bateta champ or batata chanp. So whatever you may call it, these are the most satisfying treat on any occasion, especially on Iftar spread. Kids and adults love it alike. Get more ramadan iftar recipe here.

So presenting your most delicious stuffed potato balls recipe.  Aloo (potato) keema (mince) patties or Cutlets or Tikki or kabab are my childhood delights. And, it is so simple to make. Although, it has many steps you can go slow like boil potatoes in the morning and make qeema whenever you get time around midday and simultaneously mash and season potatoes.

Then around teatime season keema and form patties and fry around night for dinner. That’s how my Dadi would make stuffed potato balls with ease and convenience. Of course, you can make it in one go. Cooling the mince and the potato will require some time while all other steps are quick and easy.

Stuffed potatoes balls with spicy keema inside and wrapped with crispy breadcrumb coating refreshes the childhood memories of living in a joint family with cousins and siblings. Dadi (grandma) use to make Aloo qeema patties with lots of love. For me being lucky is having a childhood close to grandparents (in my case also great grandparents) and being nurtured under the shadow of their wisdom and blessings.

Make sure the potatoes are boiled until cooked through. Check each potato by inserting and knife. If it slides in and out through the potato-like in butter. They are al dente. If the potatoes are undercooked, you’ll have un-cooked lumps in aloo keema Cutlets or patties.

Remove potato to a strainer as soon as fully cooked and let it air dry. Do not immerse in cold water for more than a few seconds or potatoes will absorb too much water and will be mushy.

Some varieties of potato get mushy even with precautions. Add 2-3 tablespoon of bread crumbs in the potato to make it firm enough to roll the mashed potato ball or aloo keema patties.

This is most authentic filling for aloo keema Patties and I love the original taste. But here few variation that are also great.

Hungry for more potato? Check these! 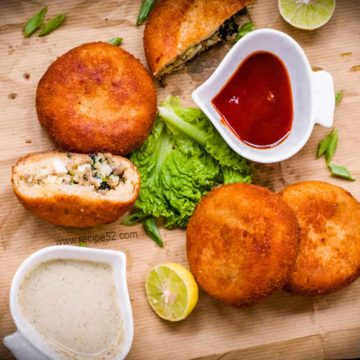 If you try any of my recipes, don’t forget to share feedback in comments. Also if you share the photo on social media, don’t forget to tag us @recipe52 and use hashtag #loverecipe52. I love to read feedbacks and see your photos.